Our latest monthly report can be found here
Last year's summary report is here.
The two charts below show the numbers of vehicles we reported to the police during the most recent week of SpeedWatch sessions, along with the percentages of vehicles that the Speed Indicator Device  (SID) recorded exceeding the speed limit, and those exceeding the reporting threshold (Speed limit + 10% + 2mph). 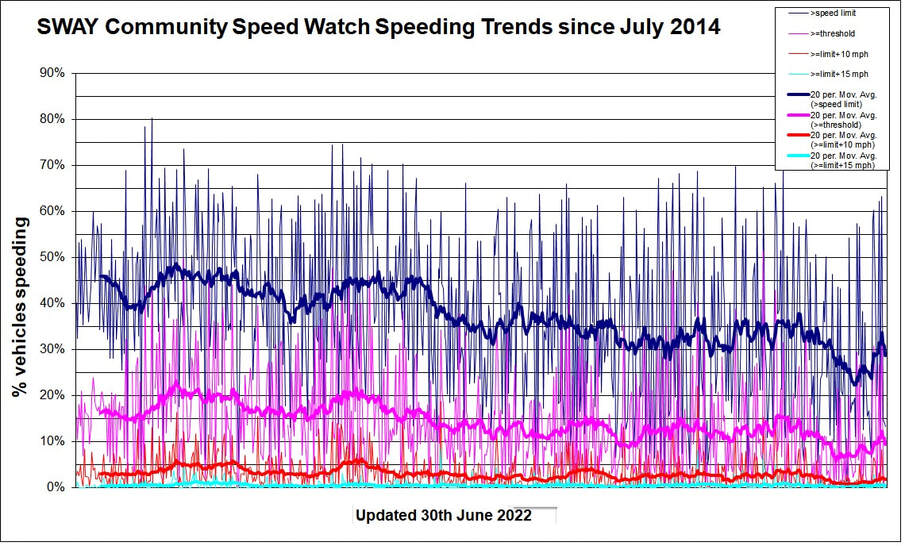 The next chart shows how the percentages of drivers obeying the speed limit on each of the roads surveyed is altering over time as SpeedWatch progresses. The lines have been smoothed to show the trends more clearly using 8 session rolling averages. These charts are the best indicator of the effectiveness of SpeedWatch at each location. Pitmore Lane North, Pitmore Lane Middle and Durnstown have all clearly improved since we began SpeedWatch. Brighton Road has been up and down but is now showing improvement, while the B3055 Arnewood Bridge Road and C75 Pitmore Lane South are still considerably worse than the rest with Pitmore Lane South actually showing a lower percentage of people obeying the speed limit than when we began in 2014. These two roads form the main arteries for commuter and other traffic passing through Sway with 2 million speeding per year. Manchester Road had not been surveyed since September 2016 as with limited numbers of volunteers, we have to concentrate on those locations where speeding is clearly more of an issue. We did however manage one session there during August 2018 which confirmed that motorists generally obey the 30 mph speed limit along Manchester Road although it is believed that this limit is too high for the road conditions generally. 20 mph might be a more appropriate speed limit for this road.
Longslade View is one of 3 sites on unfenced New Forest roads in the 40 mph zone that have recently been added to our authorised locations to help protect the free roaming animals of the New Forest from speeding motorists. At our first two sessions there in June 2019, remarkably few people were recorded speeding, and in July there and along the Setley Pond road (another 40 mph unfenced road), absolutely nobody was caught speeding. That is true CSW success.

And now for some quite interesting statistics
The table below shows statistics going back to when we started SpeedWatch in 2014. As you can see from the data, the total number of volunteer hours spent on SpeedWatch activities is quite a bit more than the number of hours spent at the roadside. This is because there are several other activities involved in Community SpeedWatch including; preparation of the data that is sent to the police, planning and organising SpeedWatch, collecting and analysing the statistics, attending SpeedWatch meetings, etc.

Our volunteers are absolutely marvellous. We are a well motivated and successful group but are always in need of new recruits. If you are interested in joining Sway Community SpeedWatch, please talk to any of our volunteers or email sway.speedwatch@gmail.com. It is a great way of helping out in the local Community as well as often being hugely entertaining. It is quite surpnsing just what the volunteers chat about out there! All it takes is a small amount of time once a month. All training is entirely free!


VERA's deployment history
This chart shows locations of VERA deployments since we started in December 2018, along with the average number vehicles per day that exceeded the 35 mph threshold for reporting.  Each deployment is generally 2-3 weeks duration.

The table below shows in greater detail those dates, times and locations of VERA deployments since we started in December 2018 along with the counts of speeding vehicles at each deployment.